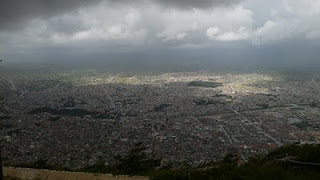 Antakya seen from the top of Mount Silpius

While the summer months in Antakya are rather dry the winter can be very wet indeed. At times you have thunderstorms lasting more than 24 hours rolling back and forth between the Amanus mountains to the west and Mount Silpius to the east. And the water comes down not in buckets but in bathtubs. It has cataclysmic proportions and the river Orontes overflows and takes along what it can find.

Yesterday one of the locals told me that in Arabic they call Antioch “Antakya ash-shakkhâkha” or Pissing Antakya, because of the rain.

When the Crusaders arrived at the walls of Antioch in 1097 they were so unlucky as to start the siege of the city shortly before the rainy season began. For four or five months they sat in the mud outside the city under the torrential cloudbursts.

In old days when the city centre was close to the present Grotto of St. Peter Antioch was often flooded by rain water coming down with the torrent Parmenius. This stream used to be called ονοπνικτες [Onopnictes], the Donkey-Drowner. Today it has been tamed by a canal in concrete.

But attempts to subdue the Donkey-Drowner are not new. Fifteen hundred years ago the Byzantine Emperor built a dam up between the two mountains of Staurin and Silpius so as to control the outflow during rainstorms. It is called the Iron Gate. 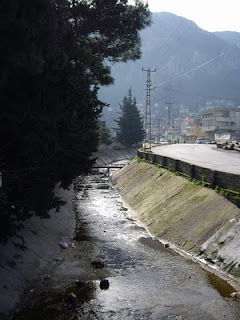