The Citadel of Antioch (Antakya) 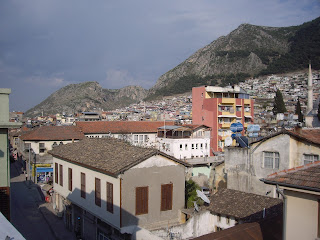 A view from a point besides the Habib-i Neccar Mosque.
The citadel is on top of the mountain to the right.

We do not know when the citadel on the top of Mount Silpius was originally built. Glanville Downey, though, has the following comment: "There is no specific literary or archaeological evidence for such a citadel, but the presence of citadels in the other major Seleucid foundations makes it almost beyond question that there was one in Antioch."[1]


According to Libanius, Alexander the Great himself had a citadel built at a site called Emathia, but it is not clear where it was situated. At the time of the First Crusade, the citadel was there and the Crusaders tried to get inside, but to no avail. When the Crusaders finally took Antioch, the citadel remained on Muslim hands until they finally surrendered.


When the French traveller and orientalist Jean de la Roque came to Antioch about three hundred years ago, he visited the citadel. He claims that he saw remains of a temple up there.


Another visitor mentions a big pool or cistern between the citadel and the summit of Mount Silpius. This pool can still be seen inside the old city walls.


The ruins can be visited, but the approach is difficult. It is worth the effort, though. For obscure reasons nobody has sought to facilitate the ascent to the place. Consequently visitors are few.
﻿ 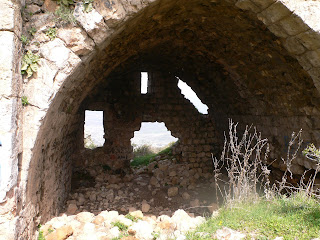 Construction inside the citadel 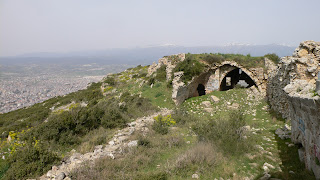 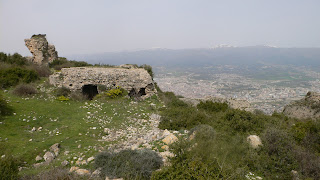 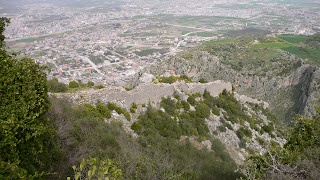 The wall descending towards the Iron Gate 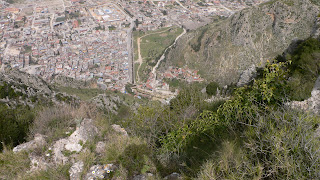 Looking down from the citadel. The torrent of Parmenius is in the centre of the picture. To the right you have Mount Staurin with the Grotto of St Peter. To the left is the area of the Forum of Valens. On top, on the other side of the street the Hilton Museum Hotel is being built. Lots of mosaics were found there. 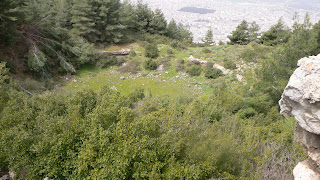 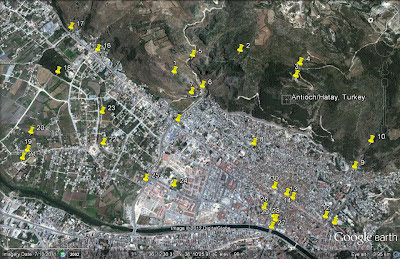 1   Mount Staurin.
2   The citadel on Mount Cassius.[1]
3   Mount Silpius.
4   Ruins of walls.
5   The Iron Gate.
6   The torrent of Parmenius.
7   The Grotto of St Peter.
8   The site of the theatre (not excavated).
9   Aqueduct (Memekli Köprü).
10 The torrent of Phyrminus.
11 Christian cemetery in Byzantine times.
12 The site of the Daphne Gate.
13 The site of the Cherubim Gate.
14 The Colonnaded Street (from the Cherubim Gate to the Eastern Gate).
15 The approximate location of the Middle Gate. Besides this place mosaics were found where the Hilton Museum Hotel is being built. This is believed to have been the centre of ancient Antioch.
16 The approximate site of St Paul's Gate.
17 The approximate site of the Eastern Gate.
18 The point where the Orontes split in two branches forming a big island in the middle of the river.
19 Ruins of the big hippodrome.
20 Temple ruin.
21 The location of the imperial palace.
22 Ruins of the Dog Gate.
23 Dried up riverbed of the eastern branch of the Orontes.
24 The location of the western wall at the time of the Crusades.
25 The approximate location of the Duke's Gate at the time of the Crusades.
26 The market area. The street of Singon (or Siagon) where Paul used to preach[2] may have been in this area.
27 The Bridge
28 The Ulu Cami. Formerly the Church of the Forty Martyrs.
29 Ancient wall, Perhaps originally a pagan temple.
30 The Habib-i Neccar Mosque. Perhaps originally the Church of John the Baptist. It contains sarcophagi with the names of the prophet Jonah, John the Baptist and Simeon the Pure (Sham'on al-Safa). On a building opposite the mosque there is an inscription from the time of the Mameluke Sultan Baibars.
_______
[1] Procopius, Buildings – Book 2, Ch. 10:15, 16: “Two precipitous mountains rise above the city, approaching each other quite closely. Of these they call the one Orocassias and the other is called Staurin. Where they come to an end they are joined by a glen and ravine which lies between them, which produces a torrent, when it rains, called Onopnictes.”
Posted by JCE at 02:46 No comments:

With Kafka to Turkey

In 1925 the most famous book of Franz Kafka was published. With the title Der Prozess (The Trial)" it tells the story of a man arrested and prosecuted by a remote, inaccessible authority, with the nature of his crime revealed neither to him nor the reader."[1] The experience of the protagonist of the book, called K., is not unlike the experience of my wife during our latest stay in Turkey.


About four years ago my wife was arrested in the Atatürk Airport in Istanbul and taken into custody. When we asked about the reason, we got no answer. About eight hours later at the office of the prosecutor, we were told that she was suspected of fraud committed in a small town of central Turkey. A male person had opened a phone line in the name of my wife and made somebody in the town buy him prepaid minutes for the phone pretending that he was a doctor who urgently needed the prepaid minutes.


As my wife is a woman, the prosecutor rightly saw that she was innocent. He took her statement and released her. However, during the eight hours of the ordeal she was sent to medical control and had her fingerprints taken. Besides, our flight had long gone and we had to pay extra for another flight. The business meeting she had planned was cancelled. I later wrote the prosecutor who had ordered her arrest without taking the trouble of sending a man to our address, asking him to have our loss reimbursed. More than three years have passed and I have not got any answer yet.


After one or two years a new case came up. This time it was in a town in central Anatolia. I learned about it by chance. Therefore we could go to the local police station where my wife could repeat her former statement without getting arrested at the international airport.


Then it happened again. Now the felon had moved out to the eastern part of Turkey where he in some obscure town had made a man buy him prepaid minutes. Also this case I managed to catch before any harm was done, so we went to our local police station where my wife for the third time gave her statement. Some weeks later an official came to our door and presented us with a nolle prosecui and we thought that now at last they would leave us in peace. But not so!


Evidently the aggrieved party in eastern Turkey had objected to the nolle prosecui and again my wife was arrested in the international airport and had to spend the night at the police station. This time they did not take her fingerprints. They had them already.


The next day my wife was taken to court. The judge saw that my wife is a woman and according to the aggrieved party the felon was a man. Thus she was released.


So far so good. I am sure, though, that this is not the end of it. The authorities do not make the effort of coming to our address with their questions. They simply leave the job to the airport police. Consequently, every time we have to leave the country, we have to go to the police to ask whether my wife is wanted or not. Otherwise she may face a night in the airport detention.


Here the intelligent reader may ask why the prosecution and the courts do not refer to our address, which is known and written in our residence permit. The answer is that I do not know.


The reader may also ask why the authorities keep harassing a woman when they from all the witnesses are being informed that the perpetrator is a man. Also here I must answer that I do not know.


What I know for sure is that all this is not due to bad intentions on the part of those in authority. We have met with unusual kindness and understanding from all the persons who have been involved in the case.


The only possible explanation I can think of is the lack of elasticity in the judicial system. Many changes have been observed in recent years, but the rigidity of the Byzantine bureaucracy (called Byzantinism by Bouchier[2]), that was taken over by the Ottomans, is still to be seen in certain procedures.


When the individual is up against the system, right or wrong, he is bound to be the loser.


_______
[1] "The Trial," Wikipedia, accessed on March 3, 2012, http://en.wikipedia.org/wiki/The_Trial
[2] Describing the late fourth century AD Bouchier writes: "and Byzantinism, as it is customary to call that carefully organized but soulless system of administration, was already apparent." – E. S. Bouchier, A Short History of Antioch (Oxford: Basil Blackwell, 1921), 163
Posted by JCE at 10:22 1 comment: