Two thousand years ago it was claimed that the attitude of the Antiochians was rather laid back. I do not know if this is still the case, but certain aspect of daily life seem to indicate that this still applies.

Four weeks ago an excavator showed up in the street where we are staying and transformed ninety percent of the street into a field. I have visited several villages in the neighbourhood of Antakya, but never seen streets like that. The closest was the main street in Samandağı two years ago. It was like driving through a street in a town in central Africa. But our street is worse.

When I am saying that our street is like an open field I am not exaggerating, in fact, it is worse. The street is a steep hill and the “field” is filled with pebble and cobble so when you go downhill you are in constant danger of sliding and falling backwards hammering you neck into one of the bigger stones in the middle of the road.

After a weeks time the lower part of the street for some reason became filled with water. Now you had to wade through mud to get to the main street. 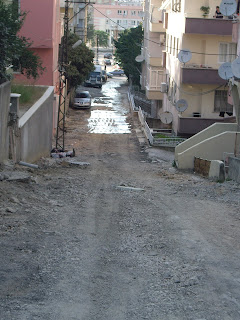 Up in the middle of the street a manhole cover to the sewerage had been removed. The hole left open was big enough for a small child to disappear into it. As this section of the street was without streetlight at night a motor cyclist could easily break his neck if his bike fell into the hole. 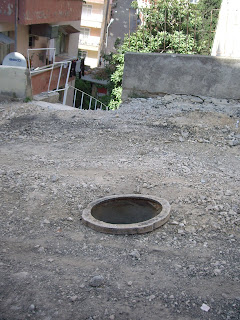 After a couple of weeks the excavator reappeared and dug a narrow ditch for electric cables up through the street. The dirt from the ditch was left in the middle of the street. Now the street was not like a field anymore. It was like climbing a mountainside when you wanted to go home. No cars could get up the street. When you had to receive parcels or packets people from the forwarding company had to carry them on their back up the mountainside.

Naturally the excavator filled up the manhole to the sewer system with dirt, so now the droppings from scores of toilets are running down the street.

They say that we are staying in the wealthy part of town. So I guess we are lucky.