The state of old Antakya


In 1822 Antakya (Antioch) was hit by an earthquake that destroyed many buildings in the city. The English gentleman Neale, who visited the city 25 years later, has the following description from an English family of three who were living in Antakya at the time of the catastrophe:


Suddenly a terrible sensation was experienced, and the whole house waved to and fro on the stormy billows of a tempest-driven ocean. The sensation was only momentary; the dizziness occasioned, such as ensures when you miss your footing and slip from a narrow plank or pathway down a steep bank side. A fearful report, and shaking as though the earth had been rent in twain, almost instantly succeeded; there was a great cloud of lime, dust, and mortar. a fearfully yell of alarm and pain from all quarters. One half of the city lay prostrate in the dust; the other half was little better than crumbling ruins.1


However, Antakya rose again, but only to be struck by another earthquake in 1872. In the meantime Ibrahim Pasha and his Egyptian soldiers had visited the city. Unfortunately he used stones from the walls off ancient Antioch and from ruins of important buildings to built his own palace and the barracks still standing. Neale writes:


In addition to the destructive effects of this catastrophe, Ibrahim Pacha, in his attempt to beautify the modern city, blew up, by means of subterranean mines, almost every particle that remained of the original walls of the city. The superb barracks built by him to accommodate ten thousand men, as well as the beautiful country-residence on the banks of the Orontes, erected for the Pacha's private use, were constructed from materials which had originally formed the oldest structures of the city.2


Today it is still possible to find old buildings which may have survived the earthquake in 1872 and therefore probably date back to the period after the great earthquake in 1822. Unfortunately, many of these buildings are in a state of extreme neglect. Subsidies have been given to have some of the old houses along the street called Kurtuluş Caddesi (formerly the Colonnaded Street) renovated. It looks however as if just the facades have got a face-lift, and nothing more. 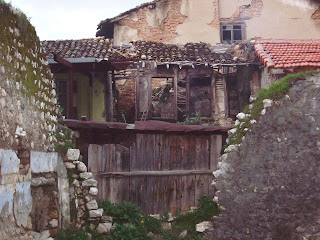 People in modern Antakya, and especially the housewives, are less than interested in moving into an old house where bathroom and kitchen are across the yard. In other cases, an old building has been left to heirs who cannot agree about what to do with it. In some cases, no doubt, listed buildings are wilfully left to decay so that a modern monster in concrete can erected on the spot. 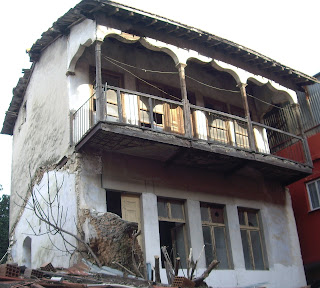 One solution may have been to allow foreign purchasers with special interest to buy the old buildings and have them renovated. Unfortunately, a decision made by the Cabinet in Ankara has put a stop to that. There it has been decided that foreigners cannot buy real estate in the province of Hatay, where Antakya is located. While it is understandable that a government may put certain restriction on the sale of real estate to foreigners, it is difficult to understand why people with a residence permit in Turkey should not be able to buy the house they live in – especially if they pay for the renovation of the place. This, at least, would be of benefit for the old part of Antakya, which, in turn, would attract more tourists. 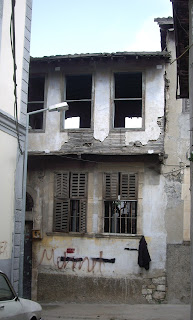 It is hoped that somebody eventually will "see the light" and permit people to contribute to the embellishment of Antakya.