I have for some time been writing on two blogs, or rather, some of my articles on Antioch - The Queen of the East in Blogspot I have re-published on Antiochene in Wordpress. However, my long stay in Antakya, formerly Antioch, and my research in connection with my book about the place (Antioch on the Orontes: A History and a Guide (Hamilton Books, 2012)) have introduced me to the School of Antioch, a special approach to the discipline of interpretation practiced by the theologians in Antioch between the third to the fifth century.[i]
What made the approach to biblical interpretation of the Antiochenes different from that of the theologians in Alexandria and from that of the Gnostics was their reliance on history and grammar and their avoidance of using the text as a basis for allegories.
Consequently, I have decided to use my blog Antiochene in Wordpress on essays about interpretation. The texts I intend to consider may be religious or secular texts, and my approach will no doubt be influenced by my interest in semiotics. The texts will to a great extent be non-fiction, texts used in connection with communication. Consequently, I do not feel that I should beware of the so-called the “fallacy of intention.    In a chapter titled “The Intentional Fallacy” Peter Lamarque has provided us with the following explanation to this expression:
“The expression ‘The Intentional Fallacy’ was coined by the literary critic William K. Wimsatt and the philosopher Monroe C. Beardsley in a jointly authored article with that title, published in 1946. A fallacy is an invalid mode of reasoning, and Wimsatt and Beardsley claimed that it is fallacious to base a critical judgement about the meaning or value of a literary work on ‘external evidence’ concerning the author’s intentions. In another paper, they described the fallacy as ‘a confusion between the poem and its origins, a special case of ... the Genetic Fallacy’. Their own position, in contrast, held that ‘the design or intention of the author is neither available nor desirable as a standard for judging the success of a work of literary art’.”[ii]


But criticism of a piece of literary art is one thing, analysing communicational text is something else. Thus my approach will be more in line with the method described by Umberto Eco in his book The Role of the Reader.[iii] In this book on page Eco gives us illustrates the mechanisms of communication with this model:

﻿
As seen on this figure, it is important that the addressee is familiar with the codes and subcodes used by the sender. Otherwise the result will be "aberrant decoding" - to use the term of Umberto Eco.
I am especially interested in the connotations of words and the misunderstandings that result when sender and addressee belong to different cultures and therefore applying different codes. This problem is all the more acute when the sender and the addressee are separated by centuries – or even millenniums.
To mention a single example of how denotation and connotations of a word may change within a few centuries is the rendering of chapter 4 verse 1 in Paul’s first letter to Timothy in the King James Version of the Bible: “I charge thee therefore before God, and the Lord Jesus Christ, who shall judge the quick and the dead …”[iv] When the King James Version was published in 1611 the word “quick” meant “living.” Today its denotation and connotations are different.
Another example of how terms are misunderstood by people of contemporary cultures is a Danish translation of an expression used by the late Saddam Hussein on George Bush Junior. In Arabic the term used for “junior” isأصغر  [aṣgar], which literally means “minor.” The Danish newspaper Politiken let Saddam Hussein speak of the “small Bush.” Saddam Hussein may not have had a great amount of respect for George Bush, but he was quoted for saying something he did not mean. Similar misunderstandings in the communication between the cultures of the Middle East and the Western World are multiple. I have no ambition in finding a solution to these misunderstandings, but I do find it entertaining analysing them.
In case you find the subject interesting, I look forward to your comments on antiochene.blogspot.com.


The Seleucid king Antiochus IV Epiphanes (d. 164 BCE), who is known for his persecution of the Jews, extended the original city of Antioch up the slopes of mount Silpius and called this new quarter Epiphanea after his own epithet.
In modern Antakya it has been decided to make an aerial cableway or telpherage from the city centre to the top of Mount Silpius. This naturally necessitates excavation for anchoring the towers. And excavation in Antakya is a hazardous business as old Antioch is buried just under the surface.
When the digging in Epiphanea started some months ago, it became clear that there was something underneath. According to what I was told the thing they found is an old Roman bath.
Here are some pictures from the site. 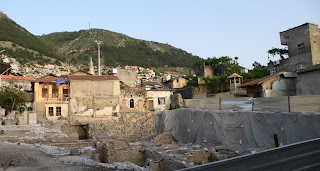 A view towards the south.
Notice the towers of the cableway. 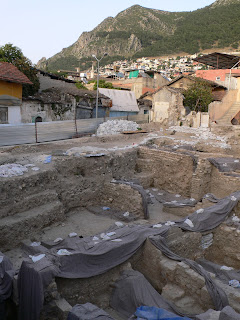 Towards the east.
The ruins of the citadel are on the top of the mountain in the centre. 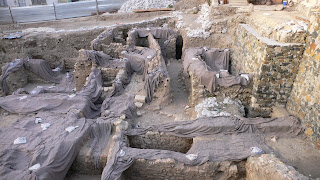