The siege of Antioch 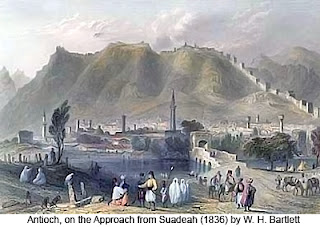 The picture depicts the Bridge and the Bridge Gate.
The Citadel is located on the left peak of Mount Silpius in the background.
The southern wall is clearly seen to the right
Among the leaders of the first Crusade were noblemen like Raymond IV, Count of Toulouse, Godfrey of Bouillon, who later became king of Jerusalem, and Baldwin of Boulogne. Bohemund, Prince of Taranto in Italy, his nephew Tancred and Robert of Normandy, however, were warlords descending from the Vikings.
Although the Franks, as the Muslim called the newcomers, were used to warfare Antioch proved to be a challenge: The walls of the city were very long and part of them was standing on Mount Staurin and Mount Silpius. The Crusaders simply did not have enough men to surround the city. Besides, Yağı Siyan could sit in the citadel on the peak of Mount Silpius and watch every movement of the Franks. 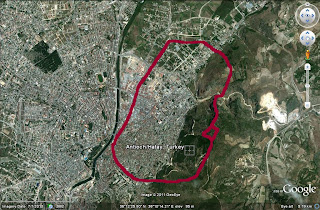 Antioch had at least five gates: the Beroea Gate on the road to Aleppo, also called St. Paul's Gate, the Dog's Gate behind the present municipality building of Küçükdalyan, the Duke’s Gate, the Bridge Gate in front of the mosque called Ulu Cami and St. George's Gate somewhere towards the south. 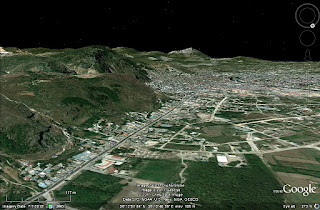 Bohemund and his men had arrived at St. Paul's Gate (the Beroea Gate), so that was where they encamped.  Raymond settled in front of the Dog's Gate and Godfrey at the Duke’s Gate. The place chosen for his camp was swampy as it was situated between the wall and the River Orontes where the western and eastern branches of the Orontes used to meet. Later Godfrey moved his men to the western bank of the river. 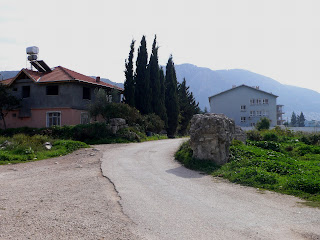 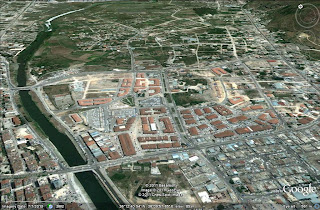 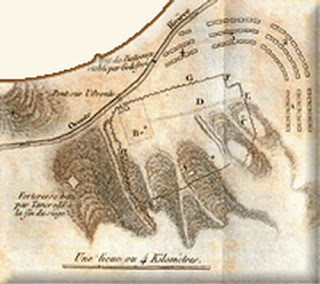 The Crusaders did not have enough soldiers to guard the Bridge Gate and St. George's Gate. Consequently, the siege was a rather half-hearted affair. Inside the city, Yağı Siyan had arrested the Orthodox Patriarch of Antioch and occasionally he put him in a cage on the wall to mock the Crusaders.
Furthermore, those inside the walls were well fed while the Crusaders outside had a problem. In December, Bohemund and Robert of Flanders found it necessary to leave to find provisions for the Crusaders.
They left at night on December 29, but the Turks immediately found out that about 20.000 soldiers were missing from the camp. Consequently Yağı Siyan and his men made it across the Bridge at the Bridge Gate and fell upon the Franks at the Duke’s; Gate but the Crusaders managed to beat them back.
Later Bohemund and Robert had to return to Antioch more or less empty-handed.
And now as the torrential winter rain of Antioch set in, people started to die from adverse weather conditions and hunger.
In March ships from Europe arrived at Seleucia (Çevlik) with provision and material for siege engines. When the Muslims inside Antioch got to know of it they ambushed the Crusaders who returned with goods from Seleucia. As the ambushers returned to the city Antioch, the Muslims there came out to chase away the interfering Crusaders. Godfrey, however, made his stand and about 1.500 Turks were killed. Very likely this battle was fought in the area between the Bridge (Köprü) and the modern Park of Antakya (Antakya Belediye Parkı).
The Crusaders now decided to build a tower at the Bridge to be able to check the sorties of the Muslims from the Bridge Gate. The tower was called the Tower of Raymond.[1] We guess that it was located close to the roundabout in front of the Bridge (Köprü).
At the southern wall Tancred, the nephew of Bohemund, fortified a monastery outside the Gate of St. George. It was called the Tower of Tancred. 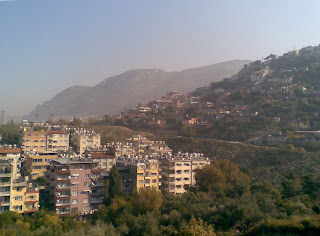 If we are to believe the old map above, the Tower of Tancred must have been located somewhere on this slope. In the background we see the three peaks of Mounn Silpius. The Citadel is on the one farthest off.
In May Kerboğa, the Emir of Mosul, set out for Antioch. Thus the Crusaders had to take the city as soon as possible. Otherwise they would have to face the army of Kerboğa with Yağı Siyan and his army at their rear.

The First Crusade arrives at Antioch

Less than ten years after the death of the Prophet Muhammad Antioch was taken by the Muslims and its name was change into Antakiya. After more than three hundred years on Muslim hands Antioch fell to the Ortodox Byzantines in 969. They kept the city until 1084. In this year Antioch was taken by the Muslim Seljuq Turks and towards the end of the 11th century the city was ruled by Yağısıyan who held it as a fief.
In the meantime something happened in France. In 1095 a council was held in Clermont. It was the Pope Urban II who presided. Before the council started the Pope had received Byzantine ambassadors who asked for western support in their fight against the Seljuq Turks. In 1071 the Seljuqs had crushed a Byzantine army at Manzikert in eastern Anatolia and within the next 20 years they had conquered most of the Middle East, Jerusalem and Antioch included.
This meant a considerable loss to the Byzantine Empire, but also the Catholic West felt the change as the pilgrims to Jerusalem now had to pass through Seljuq territory.
The Pope gave a speach and according to the chronicler Fulcher of Chartre, who may have been present, he said:

"Since, O sons of God, you have promised the Lord to maintain peace more earnestly than heretofore in your midst, and faithfully to sustain the rights of Holy Church, there still remains for you, who are newly aroused by this divine correction, a very necessary work, in which you can show the strength of your good will by a certain further duty, God's concern and your own. For you must hasten to carry aid to your brethren dwelling in the East, who need your help, which they often have asked. For the Turks, a Persian people, have attacked them, as many of you already know, and have advanced as far into the Roman territory as that part of the Mediterranean which is called the Arm of St. George; and, by seizing more and more of the lands of the Christians, they have already often conquered them in battle, have killed and captured many, have destroyed the churches, and have devastated the Kingdom of God. If you allow them to continue much longer, they will subjugate God's faithful yet more widely.
"Wherefore, I exhort with earnest prayer not I, but God that, as heralds of Christ, you urge men by frequent exhortation, men of all ranks, knights as well as foot-soldiers, rich as well as poor, to hasten to exterminate this vile race from the lands of your brethren, and to aid the Christians in time. I speak to those present; I proclaim it to the absent; moreover, Christ commands it. And if those who set out thither should lose their lives on the way by land, or in crossing the sea, or in fighting the pagans, their sins shall be remitted. This I grant to all who go, through the power vested in me by God. Oh, what a disgrace, if a race so despised, base, and the instrument of demons, should so overcome a people endowed with faith in the all-powerful God, and resplendent with the name of Christ! Oh, what reproaches will be charged against you by the Lord Himself if you have not helped those who are counted, like yourselves, of the Christian faith! Let those who have been accustomed to make private war against the faithful carry on to a successful issue a war against infidels, which ought to have been begun ere now. Let these who for a long time have been robbers now become soldiers of Christ. Let those who once fought against brothers and relatives now fight against barbarians, as they ought. Let those who have been hirelings at low wages now labor for an eternal reward. Let those who have been wearing themselves out to the detriment of body and soul now labor for a double glory. On the one hand will be the sad and poor, on the other the joyous and wealthy; here the enemies of the Lord; there His friends. Let no obstacle stand in the way of those who are going, but, after their affairs are settled and expense money is collected, when the winter has ended and spring has come, let them zealously undertake the journey under the guidance of the Lord." [1]


It seems that this affair from the outset was to be a rather unchristian business. It seems that the Pope had forgotten the words of Jesus to the Apostle Peter: "Put up again thy sword into his place: for all they that take the sword shall perish with the sword." [2] In fact, it seems that the early Christians had a completely different approach to those persecuting them that that of the Pope. For instance, Jesus was quoted saying: "Ye have heard that it hath been said, Thou shalt love thy neighbour, and hate thine enemy. But I say unto you, Love your enemies, bless them that curse you, do good to them that hate you, and pray for them which despitefully use you, and persecute you." [3] The Pope evidently ignored this. As to his co-religionists: only few of them knew Latin and it was only in this language the Bible was distributed in the eleventh century.

As the spiritual leader of the First Crusade Urban chose Adhemar de Monteil, Bishop of Le Puy-en Verlay, who at least should be able to read the words of Jesus in Latin. As we shall see this did not damp his bellicosity.

The Crusaders got on their way, a curious mixture of rabble and nobility. As described by a chronicler named Albert: "Bishops, abbots, clerics, and monks set out; next, most noble laymen, and princes of the different kingdoms, then, all the common people, the chaste as well as the sinful, adulterers, homicides, thieves, perjurers, and robbers; indeed, every class of the Christian profession, nay, also, women and those influenced by the spirit of penance all joyfully entered upon this expedition." [4]

On the way they gave proof of their peculiar idea of godliness by killing off the Jews. A certain chronicler named Ekkehard wrote: "As they were led through the cities of the Rhine and the Main and also the Danube, they either utterly destroyed the execrable race of the Jews wherever they found them (being even in this matter zealously devoted to the Christian religion) or forced them into the bosom of the Church." [5]
This was the horde that on October 21, 1097 stood at the walls of Antioch.
The day before, when the Crusaders had reached the Iron Bridge [Demir Köprü] northeast of Antioch they met with the first opposition from soldiers on their way to defend Antioch and bring provision to the army of Yağısıyan. The bridge was heavily fortified with a tower on each side. In Gesta Francorum (an anonymous work written by a person close to the Crusader Prince Bohemund) we read: "When we had begun to approach the Iron Bridge, our advance guard, who were accustomed to precede us, found innumerable Turks assembled to meet us. They were on their way to give aid to Antioch. Accordingly, our men rushed upon them with one heart and one mind and overcame the Turks." [6] 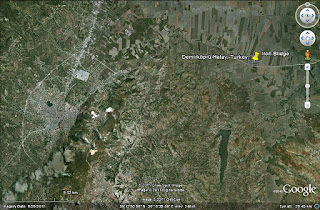 The Iron Bridge.
The city of Antioch (Antakya) is seen in the left side of the picture, west of Mount Silpius
"The next day Bohemund at the head of the vanguard arrived before the city walls; and the whole army followed close behind." [7] 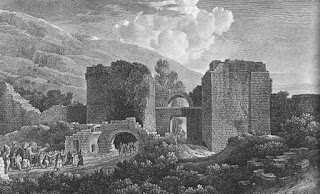 The ruins of the Beroea Gate (or Aleppo Gate).
This was where the Crusaders arrived after the battle at the
Iron Bridge.
In the background to the left we see Mount Staurin and Mount Silpius behind it.