The author Zafer Sarı, however, is more exact. He writes: "The story goes that originally there was a Roman temple on its present spot. After the spread of Christianity in Antakya, this temple was turned into a church. When the Muslims took over the city, the present mosque was built on the same spot. ... The building, which has an architectural style reminding of the Baroque, was erected by Abu Obayda Ibn Jerrah after the Muslims conquered Antakya in 638." [iv]


The observation by Zafer Sarı is in harmony with the way things were done in the Middle East years ago: temples were turned into churches and churches eventually into mosques. There may even be an evidence for this claim.


In the courtyard of the mosque, a lonely pillar is standing that evidently has no business at that location. It is overwhelmingly doubtful that Abu Obayda Ibn Jerrah put it there. It very likely belongs to something much older. 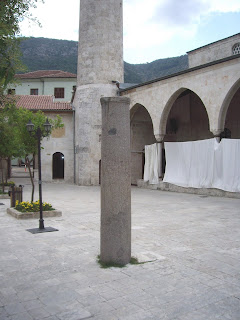 There used to be very many Greek and Roman temples in old Antioch, but most of them were either pulled down or turned into churches. This especially happened after the decree of the Byzantine Emperor Theodosius I (379-395).[v] Speaking about the aggressive destruction done by the monks, the pagan philosopher Libanius (d. ca. 393), who was a native of Antioch and living there, gives this description of the situation:


"But those black-garbed people, who eat more than elephants, and demand a large quantity of liquor from the people who send them drink for their chantings, but who hide their luxury by their pale artificial countenances, - these men, O Emperor, even whilst your law is in force, run to the temples, bringing with them wood, and stones, and iron, and when they have not these, hands and feet. Then follows a Mysian prey, the roofs are uncovered, walls are pulled down, images are carried off, and altars are overturned: the priests all the while must be silent upon pain of death. When they have destroyed one temple they run to another, and a third, and trophies are erected upon trophies: which are all contrary to [your] law. This is the practice in cities, but especially in the countries." ( Libanius, Oration 30: For the temples (Pro templis) (1830) pp.72-96, accessed August 13, 2011, http://www.ccel.org/ccel/pearse/morefathers/files/libanius_pro_templis_02_trans.htm)


According to Libanius, destruction was especially widespread in the countryside. It is therefore reasonable to expect that pagan temples in town were largely allowed to stand, although turned into churches.


Therefore, the sarcophagi we find in the Habib-i Neccar Mosque today were probably already there when Abu Obayda turned the place into a mosque. That would also explain why at least three persons who according to the Muslims are Christian saints have their shrine in the mosque: John the Baptist, Shem'un al-Safa and Habib-i Neccar.
One thing is certain: when the Mameluk Sultan Baybars took Antioch in 1268, he did not leave many Christians in the city, if any at all. Their church close to the former Cherubim Gate on what used to be the Colonnaded Street became the Mosque of Habib-i Neccar. The title of Baybars, al-malik aZ-Zâhir, is still to be seen in an inscription in its courtyard.