After more than four years in a modern house of concrete, we managed to move into one of the old houses in the central quarter of Antakya. The house is located between what used to be the Colonnaded Street and the Orontes inside the area that used to be within the first Seleucid wall. In fact, it may even be located at the spot of Bottia, the small town at the bank of the Orontes at the time of Alexander the Great.
It is uncertain how old the house is. One thing is sure: it can be found on a photo of Antioch taken from an airplane by the French in 1932. Consequently, it very likely dates back to the big earthquake on April 3, 1872 that counted VII-VIII in Antakya.[1]
But it may in fact be older. Part of the house is made of big stones while another part is evidently built later. If part of the house is older than 1872, it may have been built after the earthquake  on August 13, 1822 that destroyed most of the city (estimated as VIII).[2]
Originally it was one of the classical houses in this area with a big courtyard with trees and a well surrounded by buildings, all of them with their doors opening towards the courtyard. The house where we are living used to be part of such a complex but was later divided up in two plots.
In the part of the old courtyard that belongs to us whe had the concrete that covered the yard removed so that the original pavement was seen. However, in the middle of it a hollow was found. Modern Antiochenes told us that it in Arabic was called a jurn, a place where women used to grind wheat and make purée of tomatoes and pepper. We placed a big flower pot with a palm tree in it so that people would not fall into it. In fact, some of our workers did. 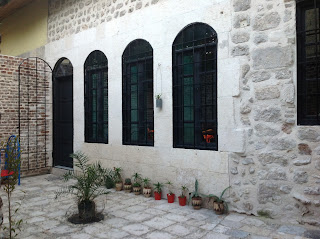 Later we found out that water collected in the jurn, so we had a hole drilled in its bottom and realised that there was a well underneath it.
The toilet and the kitchen were in a separate building with access from the yard. We kept it like that. Removing the plaster from the kitchen wall, the workers found a fireplace in the wall. Although we do not need a fireplace there, we kept it as it used to be. 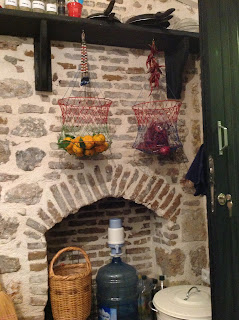 There was no bathroom, but we found out why.
The floor of the living room is elevated about 40 cm over ground level; but when entering the room, there is an area of marble on about two square meters at ground level where you can leave your shoes before stepping up into the living room. 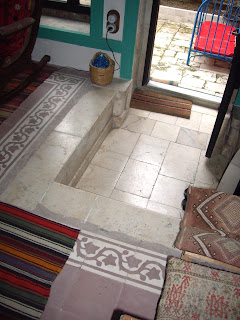 By the locals we were told this was where people used to take a bath with a bucket of hot water at their side.
The floor of the living room was covered with concrete as was the yard. We had it removed and had tiles of original pattern put on the floor. When the concrete was removed, the workes found a small hole made of stone in the floor. 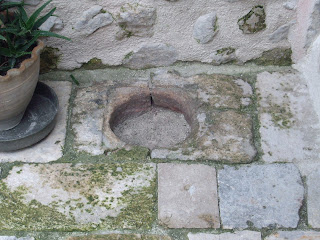 It showed up the be a primitive way of heating. In old times the hole was filled with glowing charcoal and people sat around it, probably covering the their legs and the charcoal with a wool or goat hair blanket.
The walls of the living room are filled with build-in cupboards. We have kept them in their original colour. 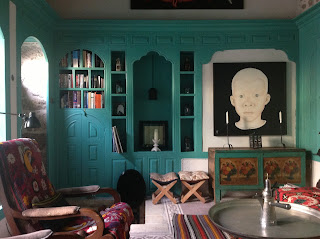 The windows are tall with internal shudders. 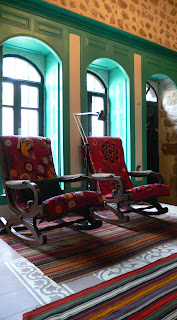 To the right in the wall towards the part of the house that has been added later (perhaps after the earthquake in 1872), there is a clear evidence that the originally was a door towards the outside. 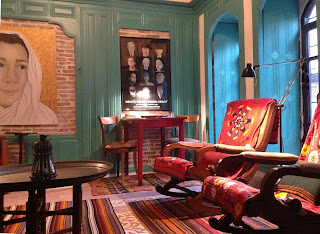 The newer part of the house is less interesting. It is shown on the French aireal photograph from 1931, so we may assume that it was added after the earthquake in 1872. We use it as a studio. 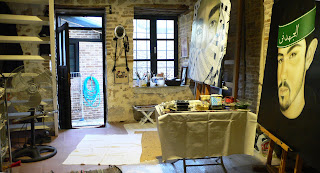 It has been an interesting experience to move into an old Antakya house. Although it in many respects is different from the houses in ancient Antioch, it has some of the same flavour. The centre of Antakya has many houses of the same sort, many of the a lot larger than ours. Unfortunately they are left to decay. 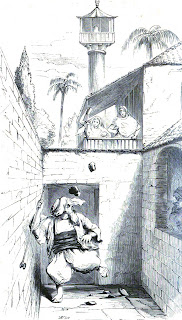