In May 1098 Kerboğa, the Emir of Mosul, left his city to help the Turks in Antioch besieged by the Crusaders. It was now urgent for the Crusaders to take the city so as not to be squeezed between the army of
In the meantime Bohemund, the Prince of Taranto in Italy, had "made friends" with a Muslim behind the walls. This man named Firouz was an Armenian who had converted to Islam. However, it seems that he had not been granted the social status he had expected from his conversion, and as he realised that his wife was cheating him with one of his Muslim co-religionists, he was ready hand over the city to Bohemund.
Firouz was supposed to defend the Tower of the Two Sisters. This tower on the wall was located at the torrent valley of Phyrminus on the slopes of Mount Silpius opposite the Tower of Tancred. 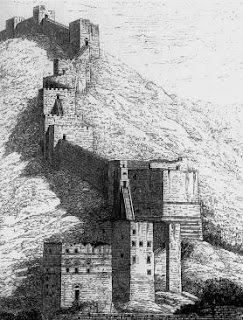 The piece of wall where the Tower of the Two Sister was located. 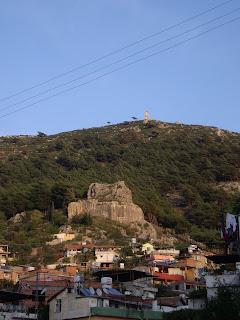 It should be mentioned that two other "Holy Lances" are known: one of them was kept in Italy about a hundred years before the siege of Antioch, the other had been kept in  Constantinople for about four hundred years.
With this newly acquired weapon the Crusaders made ready for facin Kerboğa outside the walls of Antioch. The showdown took place on June 28.
During the battle some of the Crusaders allegedly saw St. George on a white horse coming to their aid [v] and the Muslims betook themselves to their heels. The reason was hardly the vision of the starved Crusaders. Some of the Muslim generals evidently felt that it would not be an asset to them if Kerboğa had the day. So they simply left the battlefield. Whatever the case, the Crusaders pursued them as far as the Iron Bridge after which they let the return to the places they came from.
All this had been witnessed by the Muslim garrison in the citadel on the peak of Mount Silpius. When the commander så how the situation developed he found it practical to surrender to Bohemund and convert to Catholicism.[vi] 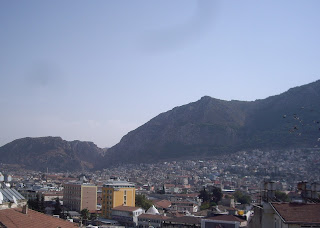 The Citadel is on the peak of Mount Silpius towards the centre.
The small mount to the left is Mount Staurin.
﻿
﻿
﻿
The Crusader army stayed in Antioch for another six month, but in January 1099 they set out towards Jerusalem. Bohemund, however, stayed and became the first prince in the Norman Principality of Antioch that was to last until 1268 when the city was totally destroyed by the Mameluke Sultan Baibars.
[1] August C. Krey, The first crusade; the accounts of eye-witnesses and participants (Princeton: Princeton University Press 1921) 237 - 239 (Raoul).
Posted by JCE at 02:04 No comments: