The Cave Church of St. Peter in Antioch – Documentation 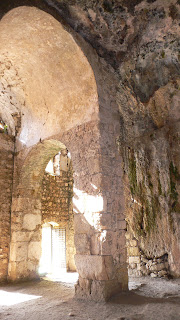 A shown in an earlier post (http://antioch-on-the-orontes.blogspot.com/2012/04/grotto-of-st-peter.html) a cave in modern Antakya is by some regarded as the first church in history. Interestingly, this grotto is not mentioned in early sources.


The oldest church found is, apart from so-called house-churches, the Megiddo Church from the third century. In fact, even this may be regarded as a house-church. [1] Only after the Edict of Milan in 313 CE church building really started. [2] This edict issued by Licinius and the Constantine the Great permitted Christians to practice their religion without the interference of the State. Constantine himself, who by the way was a pagan, took steps to having churches built. Thus, he had the church of Hagia Eirene in Constantinople (now Istanbul) built on a spot where a pagan temple used to stand.


Constantine also took steps to have a church built in Antioch. It was located on what is now the eastern bank of the Orontes opposite the stream now called Kavaslı. The only reason this is interesting in this context is the words of the French traveller Jean de la Roque, who visited the city in 1688:


The Christians of Antioch still see with pain what is left of the famous basilica now collapsed that had been dedicated to the Prince of the Apostles by the Emperor Constantine and described so beautifully by Eusebius. It was in this house of worship it is believed that they found the tip of the spear that pierced the side of the Saviour. [3]


This would give us the impression that a basilica dedicated the Apostle Peter had been erected in Antioch on the order of Constantine. However, if we look at the description of Eusebius mentioned by Jean de la Roque, we find something else:


He [Constantine] also decorated the principal cities of the other provinces with sacred edifices of great beauty; as, for example, in the case of that metropolis of the East which derived its name from Antiochus, in which, as the head of that portion of the empire, he consecrated to the service of God a church of unparalleled size and beauty. The entire building was encompassed by an enclosure of great extent, within which the church itself rose to a vast elevation, being of an octagonal form, and surrounded on all sides by many chambers, courts, and upper and lower apartments; the whole richly adorned with a profusion of gold, brass, and other materials of the most costly kind.[4]

Evidently, what Jean de la Roque had seen may have been the ruins of the Octagonal Church, also called the Great Church, not the Church of St. Peter.


In fact, the fourth century is well documented, as far as Antioch is concerned; but nowhere in the homilies of the cleric John Chrysostom or in the writings his teacher, the pagan philosopher Libanius, any church of St. Peter is mentioned, nor is any grotto bearing his name.

This is odd indeed as the third century saw a virtual "explosion" in veneration of saints, and churches bearing their names were built.


The first church we have been able to find in Antioch with any reference to the Apostle Peter is the Church of Cassianus (Kusyan or Kusian). This was the place where the body of Symeon Stylites the Elder was placed after his death until it was moved to the Great Church mentioned above. [5]


It is unclear who Cassianus was. There was a certain John Cassianu, an ascetic whodied in Marseille, France, in 435. Symeon died in at his place between Antioch and Aleppo in 459, and it is unlikely that a church bearing Johns name had been built by then.


Where history is weak, myth comes to the rescue. After visiting Antioch 1051,  the Christian physician Ibn Butlân gave this description:


In the centre of the city is the church of Al Kusiyan. It was originally the palace of Kusiyan, the king, whose son, Futrus (St. Peter), chief of the disciples, raised to life. It consists of a chapel (Haikal), the length of which is 100 paces, and the breadth of it 80, and over it is a church (Kanisah), supported on columns, in which the judges take their seat to give judgment, also those sit here who teach Grammar and Logic. At one of the gates of this church is a Clepsydra (Finjân), showing the hours. It works day and night continuously, twelve hours at a round, and it is one of the wonders of the world. [6]


The same church is mentioned by the Persian geographer al-Istakhri, who visited Antioch a hundred years before Ibn Butlân. He also mentions other churches, but not any Grotto of St. Peter.


The Arab historian al-Masûdi, who came to Antioch about the same time, tells us that the Church of al-Kusyân was one of the most important churches is the city. He does not mention any cave church of St. Peter. [7]


In 1098 the Crusaders captured Antioch and established the Principality of Antioch. And now a certain Cathedral of St. Peter is mentioned frequently in our sources. According to the description given, however, this church was not in a cave.


A chronicle of the First Crusade called Gesta Francorum has this to tell about finding the lance that supposedly had been used on Jesus Christ:


Accordingly, upon hearing the statements of that man who reported to us the revelation of Christ through the words of the apostle, we went in haste immediately to the place in the church of St. Peter which he had pointed out. Thirteen men dug there from morning until vespers. And so that man found the Lance, just as he had indicated. They received it with great gladness and fear, and a joy beyond measure arose in the whole city. [8]


It is unlikely that thirteen men can dig half a day in the floor of the cave church. The description simply does not match.


Furthermore, in 1149 Prince Raymond of Antioch was buried in the vestibule of St. Peter's, in 1170 part of the church collapsed over the Greek Orthodox Patriarch,  in 1189 King Frederic Barbarossa was buried there, and in 1194 the citizens met in the court-house of the church to discuss the future of the city. [9] Nothing of this would match the grotto.


There is all reasons to believe that what was former known as the Church of Kusyân (or Kusiyân) was now known as the Cathedral of St. Peter. [10]


In 1268 Antioch was destroyed by the Egyptian Sultan Baibars, and whatever churches he may have left standing were transformed into mosques. Nevertheless, in 1580 the Muslims donated the cave to the Christians in Antakya (Antioch),[11] and when travellers from the West eventually started to arrive, they found no churches, but the  local Christians showed them this cave.


The anthropologist Richard Pococke has the following to tell us from his visit in 1738:


Towards the iron gate, is the church of St. John, which is hewn out of the rock, being a sort of grotto open to the west; there is no alter in it; but the Greeks, who have their service there every Sunday and holiday, bring an alter to the church, and near it they bury their dead.[12]


In 1816 the Englishman James Silk Buckingham passed by. He writes:


The Christians have made several unsuccessful efforts to build a church for themselves here; but, though they are not wanting in wealth, and successive firmans have been obtained from Stamboul for that purpose, yet, the fanaticism of the Turks and some unfortunate fatality which they think attached to the town itself, has hitherto always obstructed its execution. They resort, therefore, to a cave on the east of the town for the performance of their religious duties.[13]


Evidently the Christians met in the cave, not because of any association to any saint or apostle, but because they had no other choice.


In 1847 the English gentleman Frederic Arthur Neale stayed in Antioch for some months. He describes the Orthodox church and the Catholics in the city, but he does not mention any cave church.[14]


The wall descended from the Iron Gate into the plain, passing below the ancient Church of St. John, lately purchased by the French with a piece of ground for a cemetery. This church is in fact a very ancient excavation from the living rock – two pillars have been left standing in front as a portico. In the corner, besides the altar, is a small well, and the grotto seems to have been excavated some way further.[15]


In 1856 the cave was purchased by the French consul in Aleppo and donated to the Catholic Church. Only after this, the cave was associated with the Apostle Peter and the first century Christians. 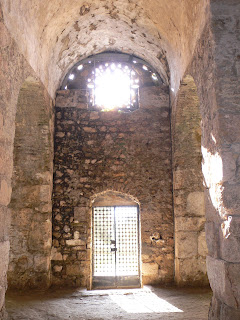 
[6] Gui Le Strange, Palestine under the Muslims; a description of Syria and the Holy land from A.D. 650 to 1500. Translated from the works of mediaeval Arab geographers. London: Published for The Committee of the Palestine Exploration Fund by Alexander P. Watt, 1890. 370, 371.


[12] John Pinkerton, ed., A general collection of the best and most interesting voyages and travels in all parts of the world, Vol. X. 561.