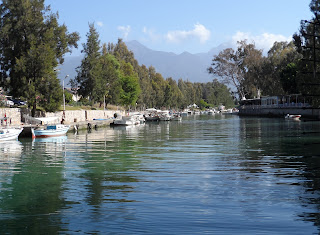 The river at Arsuz.
Northwest of Antakya, behind the Amanus Mountains on the Mediterranean coast stands the small town of Arsuz, the Rhosus or Rhossus of classical times. Strabo (d. ca. 24 AD), for instance, mentions it in his Geography: "Near the sea in this region lies Seleuceia, and Pieria, a mountain continuous with Mt. Amanus, and Rhosus, which is situated between Issus and Seleuceia."[1]
Nearly 200 years after Strabo wrote his Geography, there was a congregation of Christians in the small town. At that time, though, the ideas of the Christians differed from the teaching of the early congregations. Thus, in Rhosus the congregation used a "gospel" that was regarded as spurious by the Christians in Antioch. It was called The Gospel of Peter. 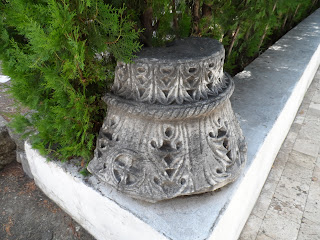 In Syria, and many other places in the ancient world Christianity had been influenced by Gnostic doctrines. One of the teachings popular among the Gnostics was that everything material is by nature bad. Consequently, according to them, the body of Jesus cannot have been material at all.
The apostle John is arguing strongly against this belief in his first letter.[2] It was difficult to challenge his authority, so instead people with contradictory ideas started to write counterfeit letters and gospels carrying the names of some of the apostles of Christ. One of these gospels was the Gospel of Peter.
When the bishop of Antioch realised that the small congregation used the Gospel of Peter believing it genuine, he felt the need to warn his co-religionists. 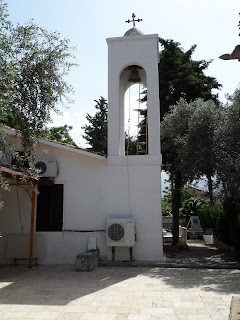 The Orthodox church at Arsuz.
In the second century there was no church building.
The congregations met in private homes.
The church historian Eusebius, who wrote his Church History about 150 years later, has this to tell:
Chapter XII.—Serapion and his Extant Works.
It is probable that others have preserved other memorials of Serapion’s literary industry, but there have reached us only those addressed to a certain Domninus, who, in the time of persecution, fell away from faith in Christ to the Jewish will-worship; and those addressed to Pontius and Caricus, ecclesiastical men, and other letters to different persons, and still another work composed by him on the so-called Gospel of Peter.
He wrote this last to refute the falsehoods which that Gospel contained, on account of some in the parish of Rhossus who had been led astray by it into heterodox notions. It may be well to give some brief extracts from his work, showing his opinion of the book. He writes as follows:
“For we, brethren, receive both Peter and the other apostles as Christ; but we reject intelligently the writings falsely ascribed to them, knowing that such were not handed down to us.
When I visited you I supposed that all of you held the true faith, and as I had not read the Gospel which they put forward under the name of Peter, I said, If this is the only thing which occasions dispute among you, let it be read. But now having learned, from what has been told me, that their mind was involved in some heresy, I will hasten to come to you again. Therefore, brethren, expect me shortly.
But you will learn, brethren, from what has been written to you, that we perceived the nature of the heresy of Marcianus, and that, not understanding what he was saying, he contradicted himself.
For having obtained this Gospel from others who had studied it diligently, namely, from the successors of those who first used it, whom we call Docetæ[3] (for most of their opinions are connected with the teaching of that school) we have been able to read it through, and we find many things in accordance with the true doctrine of the Saviour, but some things added to that doctrine, which we have pointed out for you farther on.” So much in regard to Serapion.[4]


And indeed, there were very strange assertions in the Gospel of Peter. Among other things it has the following account about the resurrection of Jesus:


And in the night in which the Lord's day was drawing on, as the soldiers kept guard two by two in a watch, there was a great voice in the heaven; and they saw the heavens opened, and two men descend from thence with great light and approach the tomb. And that stone which was put at the door rolled of itself and made way in part; and the tomb was opened, and both the young men entered in.


When therefore those soldiers saw it, they awakened the centurion and the elders; for they too were hard by keeping guard. And, as they declared what things they had seen, again they see three men come forth from the tomb, and two of them supporting one, and a cross following them: and of the two the head reached unto the heaven, but the head of him that was led by them overpassed the heavens. And they heard a voice from the heavens, saying, Thou hast preached to them that sleep. And a response was heard from the cross, Yea.[5]


A speaking cross and men as tall of skyscrapers! No wonder that the bishop from Antioch got concerned. 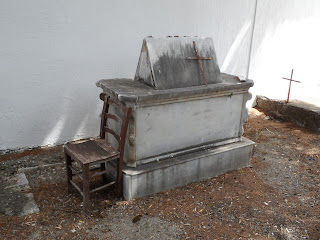 
Today Rhosus is called Arsuz. It is the only town in Turkey with a non-Muslim mayor. He is an Orthodox, and besides his job at the municipality, he is running a small fish restaurant besides the river. 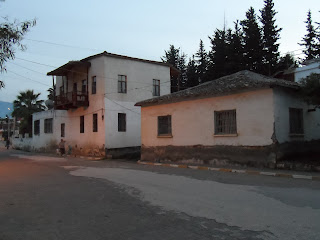 People in Arsuz are very kind indeed. There are Sunni Muslims, Nusayri Alewites and "Greek" Orthodox. But they are living together in peace and tolerance: A beautiful example for the rest of Turkey and for Europe as well. 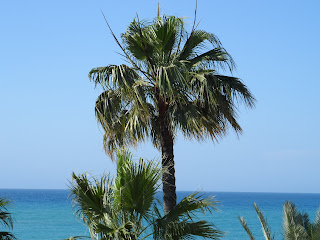