Simeon Stylites the Elder may have been the first ascetic to climb a pillar and stay there until his death (in 459), but he was not the last one.
Simeon Stylites the Younger was born in Antioch in 521. We are told that he grew up in the neighbourhood called Cherubim. This quarter was close the old Daphne Gate where Titus has placed cherubs taken from the Jewish temple in Jerusalem at its destruction in the year 70. During the time of the Byzantine Emperor Theodosius II the southern part of the city wall had been moved further south so that it followed the torrent Phyrminus opposite to where the barracks are located today. What happened to the cherubs is not known, but the quarter kept the name of Cherubim. It was situated somewhere in the area between the Habib-i Neccar mosque and the mosque called Sarımiyye.[i]
About Simeon Stylites the Younger we are told that "from his childhood he was under the special guidance of Saint John the Baptist and adopted an extremely ascetical way of life."[ii] If the assertion is true that the Habib-i Neccar Mosque used to be the Church of St. John the Baptist, it is safe to conclude that Simeon's home was close to that spot. It will be remembered that a side chamber to the mosque has a sarcophagus with the name of John the Baptist on it.
Simeon was an ambitious boy. When he climbed his first pillar he was only about seven years old. We are told that he chose a spot close to another stylite named John. But Simeon grew, and so did his pillars. When John died, the asceticism of Simeon became even more austere. Eventually he ended up on a pillar between twelve and sixteen tall on the top of a small mountain between Antioch and the Mediterranean. The Mountain of Miracles it was called, due to the miracles Simeon was believed to have worked.
In time a small group of buildings somehow materialised around the pillar on the otherwise empty mountain top. East of the pillar there was a church dedicated to the Trinity. To the west there was an atrium, an entrance to the complex and places where monks and pilgrims could stay. Later on, churches were built to the north and to the south of the octagonal square where the column was standing. 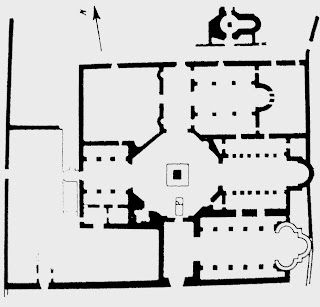 A plan of the complex
(Verdier, "A Medallion of Saint Symeon the Younger") 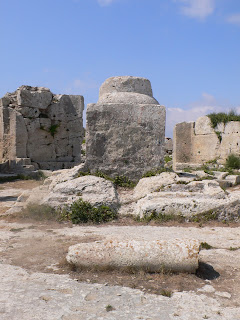 What is left of the column today
Today the locals call the ruins Manastır (Monastry) and between the mountain and the Mediterranean there is a small town called Samandağ (Turkish for the Mountain of Simeon). From the mountain there is a marvellous view: towards the west is the Mediterranean, to the south Mount Casius (Arabic: جبل الأقرع‎  [jabal al-aqra']) with its 1.700 metres, and to the northwest the Orontes valley and Antakya (Antioch). When the weather was good Simeon could spend hours just enjoying the view – if this is something stylites do. At least he could scrutinise all what was going on inside the monastery. The problem was bad weather, gale and rain.
It has been claimed, though, that the stylites had a roof over their head. The peculiar roof of the minarets of old mosques in Antakya may have been inspired of the roof of the stylites. [iii] Medallions with pictures of the stylite made to his honour, though, indicate that all there was on the top of the pillar was a wooden platform of about five square metres with a railing around it. Besides the column there was a sort of staircase carved out of rock. People who for various reasons wanted to consult Simeon could climb the stairs and converse with him. This block of stairs can still be seen beside the remains of the column. [iv] 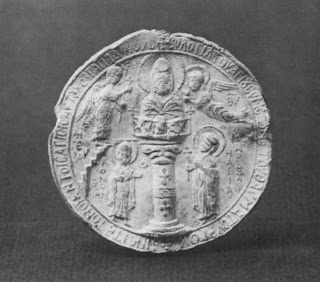 We are told that Simeon climbed his pillar on the Mountain of Miracles in 551. He died in 597 and was buried close to his pillar where his mother Martha had been buried in 551. At his death he was about 76 years old. [v]
We may wonder what makes a man spend most of his life on the top of a pillar. At least we know that the inspiration was not from Christianity as we know it from the New Testament. Jesus and his apostles did not advocate asceticism and although the apostle Paul said: "I give blows to my body, and keep it under control," [vi] he did not speak about asceticism. The context and Paul's own life show us that he spoke of self-control and self-sacrifice. Interestingly Wallace-Hadrill has this comment about Manichaeism (a non-Christian dualistic religion that flourished in the East from the third century onward): "The ascetic demands which were an offence to Persians and Muslims were precisely the attraction for the Christian monks in Syria." Very likely asceticism was a notion imported from the East. [vii]
It seems, though, that some other influence was at work as well: If a boy five or seven years old finds it interesting to sit on a column, somebody must have made the idea look attractive. The name the parents had chosen for their son had been taken from the other stylite named Simeon who had been sitting on a pillar halfway between Antioch and Aleppo. We are told that it was Simeon's mother Martha who suggested that a monastery was built around the column on the Mountain of Miracles. Martha spent most of her time at the base of the column and she was depicted on some of the medallions made in honour of the stylite. She has even been regarded as a saint. Whatever her motives may have been, she came to share the fame of her son.


Lately a platoon of huge windmills has been put up around the ruins on the Mountain of Miracles. It is a weird experience. 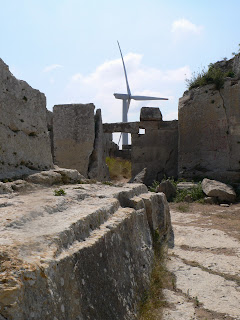 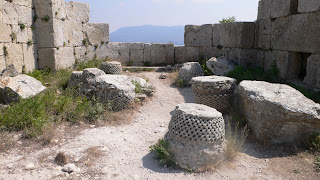