The Grotto of St. Peter

In Mount Staurin across from the torrent of Parmenius you find the Grotto of St Peter facing the west. 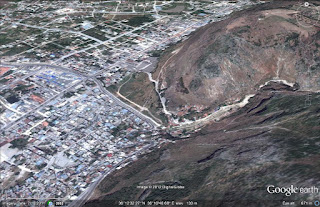 The grotto is located on the slopes of Mount Staurin in the centre of the picture. The populated area in front of it was the Forum of Valens in Byzantine times. On the left side of the highway, behind Mount Staurin at the crossroad, mosaics from prominent buildings have been found indicating that this area was an important place in town.


Each year this grotto, also called the Church of St Peter, is visited by thousands of tourists and pilgrims. According to a CD from the governor's office in Hatay,[1] the grotto was proclaimed a "site of pilgrimage by Pope Paul VI" in 1983. Furthermore, it is claimed that this cave was used as a church by the first Christians and that it probably was here the word Christian was used for the first time.


One of the local stories goes that Peter when arriving coming to Antioch decided to found a church there and found the cave fitting for this purpose. It is held that the grotto was chosen because it was a suitable hiding place for the persecuted Christians.[2] Thus university lecturer Dr. Uysal Yenipınar writes:


St. Peter held his frst meeting and performed his first baptism in Antakya in the grotto church at the skirts of Mount Staurin. Those who assembled in this grotto at the border of the Jewish quarter received for the first time the name Christian in this grotto, meaning that they adhered to the teachings of Hıristas, Jesus Christ. St. Paul and St. Barnabas gave their first sermons to the Christian congregation in this grotto.[3]


The same story is found in the book XIX. Yüzyılda Bir Osmanlı Şehri Antakya[4] and the story is repeated to every tourist who cares listening to a guide.


The homepage of the Catholic Church in Antakya (Antioch), however, is more cautious:


Clearly this was a site of pagan worship which the Christians, rather than destroying, later transformed into a site of their own religion, and assigned it the name of an Apostle.


Naturally, this religious transformation must date from the time when this became possible, namely when the Emperor Theodosius the Great [AD 379-395], in the Edict of Thessalonica, proclaimed Christianity the state religion. ...


It would be fair to conclude that the mountain was a sacred place for the city, dedicated to some pagan god.


There were two aqueducts fed from the streams that ran down to the thermal pools which were below and to the right of the small incline which leads to the Cave.

This is in line with what Glanville Downey observed in his scholarly book on Antioch: "A grotto on Mount Silpius has traditionally been called the grotto of St. Peter, where he is supposed to have preached and baptized, but there is no satisfactory proof of this association."[6]


In fact, even in the well documented fourth century we hear nothing of some grotto dedicated to the apostle Peter. Although the quest for "holy relics" had become a fashion, nobody seems to have believed that the city possessed one of the most important sites in Christendom.


And why, anyway, should the local Christians at the time of the apostles assemble in a cave? "To hide from persecutors!" the story goes.


It should be remembered, though, that early Christians fled from Jerusalem to Antioch to avoid persecution when a Christian named Stephen had been lynched there. As the Bible book of Acts relates:


Then those who had gone away at the time of the trouble about Stephen, went as far as Phoenicia and Cyprus, preaching to the Jews only. But some of them, men of Cyprus and Cyrene, when they came to Antioch, gave the good news about the Lord Jesus to the Greeks. And the power of the Lord was with them, and a great number had faith and were turned to the Lord. And news of them came to the ears of the church at Jerusalem: and they sent Barnabas as far as Antioch."[7]


In fact, there is no report of any persecution of Christians in Antioch until the end of the first century.[8] However, even if there had been persecution of Christians at the time of the visit of Peter, the grotto would have been a very bad place to hide. During the first century, and many centuries to come, the grotto was located in the centre of Antioch, not far from the theatre and the Colonnaded Street.


On this map drawn by the Italian scholar Giovanni Uggeri,[9] I have marked the Grotto of St. Peter with red, the East Gate with blue and the Cherubim Gate with green. 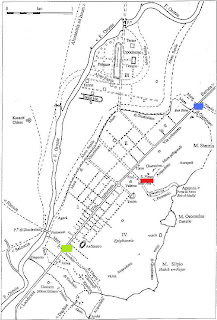 To try to have secret worship in a cave in the centre of Antioch would be like having clandestine meetings on Times Square in New York. Why use a place so conspicuous when you could use one of the thousands of houses in downtown Antioch where you could have you meetings without any interference!


First time we hear of a Church of St. Peter in Antioch is at the time of the Emperor Constantine who was also called the Great (306-337). This, however, was evidently not the grotto. At the time of the Crusader Principality (1199 – 1268) there was a Cathedral of St Peter. The grotto is not mentioned and later visitors say that the locals call the grotto the Church of St John.


Whatever the case, it is not at all unsafe to conclude that the apostle Peter had nothing to do with the grotto bearing his name, although he may have known about its existence.